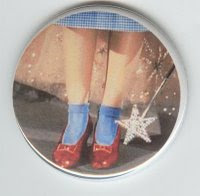 I was tagged for this meme by Queen Size Funny Bone - I love her!

The following is a little TAG that allows your Bloggy neighbors to get to know a little information about the town or city you live in. State the name and then Post 10 facts or observations about the town you call home. Then tag 4 people.
Home is Humble, Texas, a suburb of Houston, although I moved to another suburb on the other side of Houston 3 1/2 years ago. Humble will always be home! In fact, I wrote a Thursday Thirteen about my home town a long time ago.

1. The "H" is silent. It is pronounced Umble.
2. Humble is named for Englishman Pleasant S. Humble, a San Jacinto River ferry operator whose family settled there before the (US) Civil War.
3. George Bush Intercontinental Airport is five minutes away. I'm used to planes going over, so when 09/11 happened, it was eerily quiet in the sky.
4. Located on the Texas and New Orleans Railroad, later the Houston, East, and West Texas Railway.
5. The First United Methodist Church of Humble was established in 1886. (Click on the link for an inside look at the historic chapel.) This is where both my sister and I were baptized, confirmed, and married.
6. Humble became a pioneer oil “boom town” in 1904 when oil was discovered in an area known as Moonshine Hill (figure that one out). In 1905, Humble had the largest producing oilfield in Texas.
7. Ross Sterling (later, a governor of Texas) founded the Humble Oil and Refining Company in 1911.
8. Humble Oil became known as Exxon over two decades ago.
9. In 1912, during a drill, what was supposed to be oil turned out to be a free-flowing artesian well which later provided water to the bath houses and private homes. It is still flowing today and is located across the street and half a block from the Church.
10. Humble was a small, rural, cowboy town when I was little. You could get an ice cream for a nickel at the Rexall before you went to dancing lessons across the street. A few stores down was a one screened movie theater called teh Jewel. Quarter movies! I saw the Poseidon Adventure, Soilent Green, James Bond, the Shaggy Dog, and Herbie the Lovebug there.
Now Humble is just like any other suburb. Thanks for tagging me, Tammy!
I tag
My Kids are My World
And We'll All Float On
Cafe at the End of the Universive
and Up the Hill Backwards
Posted by Forgetfulone at 10:27 PM