Blindfolded at the Park 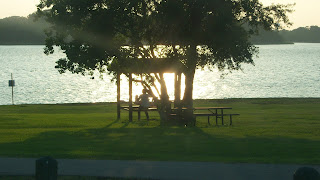 My husband asked me to take him to the park so he could get some use out of the ridiculously expensive kayak he bought last year and has used 2 or 3 times. So, I obliged, and my son and I dropped my husband and his kayak off at one end of the lake and drove to the other end of the lake to wait for him. We had brought the dog with us, but we forgot the leash, and my son had "forgotten" to put shoes on. So, we were stuck waiting in the truck in the park for what turned out to be an hour!

As soon as I eased into a parking place in the general area where I thought my husband would paddle, I noticed the girl in the front seat of the car two spaces away (no car in the space in between us) was wearing a blindfold! The trunk of the car was open, and she appeared to be groping around the glovebox area of the car and talking to herself.

Well, my first thought was, "Oh my gosh! She's been kidnapped, and the kidnapper is going to subdue her and stuff her in the trunk." Horrible thoughts of the suspense movie type were running through my head. What would I do? What SHOULD I do?

A couple of minutes later, a somewhat scruffy looking young man (who was showing a bit too much of his boxers for my taste) ran up to the car with a large thermos. He reached in the car on the driver's side then went around to the trunk. He tossed the thermos in and slammed the trunk, then he went to the passenger side to get his victim.

If I'd been paying attention to begin with, I would have noticed him before. He'd been nearby the whole time. He got her out of the car and started walking her toward the lake. He even waved to me when he caught me watching his every move. What I didn't notice before was the picnic table with an awning on which he had arranged a tablecloth, flowers, and a meal with a perfect view of the sunset coming down over the lake. How romantic!

With my fears put to rest, my next thought was, "I want to take a picture!" My son, who does not embarrass easily, was dying. "No, please, mom, don't! It's not your business. They're strangers!" I did take a picture, from the front seat of the truck through the window, the results of which are at the top. Not my best photography. You can't even see her because of the tree, but I promise, she's there. I think my son really would have died had I followed my gut reaction and actually approached them for a photo opportunity. I think they would have been happy to pose, don't you? And of course, I would have sent them the photo via email so they could have it to show their grandkids someday (or to shoot darts at if things don't work out).

I just thought it was so romantic and sweet. My husband thinks if he does anything romantic for me, other than the occasional bouquet of flowers, I will no longer respect him. He is so wrong.
Posted by Forgetfulone at 4:37 PM