Focus on the Positive

I realize there are people who live not too far from me that are seriously suffering including my own sister who lost a great portion of her roof, my school building that lost a great deal of the roof, and many people who have completely lost their homes. This is in no way meant to downplay that. For right now, I want to focus on something positive.

Hurricane Ike brought my family together like nothing else could do.

We were ecstatic to find that the electricity came on about two minutes before we (my husband, my two step-daughters and I) pulled into our driveway Sunday evening after a two day stay in Corpus Christi. I was even more ecstatic that my twins were there, having just arrived with their dad. It was strange not being with them during this emergency. We were also especially pleased that we had very little damage to our home, mainly just the blown-down fence and a few pieces of siding. We realize how fortunate we are. The tap water is unsafe for now, but we stocked up on bottled water and non-perishable food.

We began to unpack, pausing to chat with neighbors who were out in their yards cleaning up fallen limbs. We had dinner and settled in. The satellite was working, so we could watch TV, although the Internet was down.

Less than three hours later, we were plunged into darkness. No electricity! Out came the flashlights and the candles, with many stipulations being placed on the use of candles. A friend of ours made it through the hurricane only to have her home burn down due to carelessness of the relatives staying with her and their use of candles. It’s a long story, and a very scary one.

With guidelines in place, we gathered in the living room with a couple of candles lit and quickly became bored. Instead of suffering and lamenting our poor luck (as if we were truly suffering), we broke out the family games! We played a drawing game my oldest step-daughter made up (below is a picture 2 of our daughters made up, albeit strange). We played Uno, black jack, Scrabble, and we even colored pictures. It was great fun! Instead of all us doing separate things, we were together. Under normal circumstances, this would never happen. 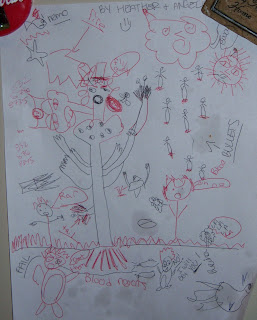 A cool front came through, dropping the temp into the 70’s, so we opened the windows and fell asleep to a slight breeze. The next day was spent mostly cleaning up more debris in the yard and talking with neighbors, everyone helping each other. We even planned a cook-out. The electricity came on about 2:00 PM, but we carried through with our cook-out plans.

My family and two others got together and grilled chicken, steaks, and corn-on-the-cob in the neighbor’s driveway, and we all donated potatoes and vegetables. We enjoyed the cool weather outside, drank some adult beverages including homemade wine, had a wonderful dinner, and simply enjoyed talking with each other. This also doesn’t happen often under normal circumstances.

A disaster can bring families and communities together like nothing else I know, and while I wouldn’t wish for a hurricane or any other type of disaster to happen to anyone, once it does, making the best of it makes all the difference.
I still have two giveaways going on right now.
Prima Princessa Swan Lake DVD
Book Giveaway-The History of Love
Posted by Forgetfulone at 6:02 PM