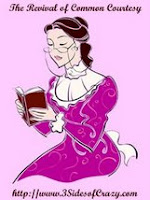 Thank you to Tamy at 3 Sides of Crazy for starting The Revival of Common Courtesy.


Whether your table manners are formal or informal, the do's and don'ts often vary greatly depending on whether you are at home having a casual meal, dining at a restaurant, having a special guest, or even depending on where you live. It may be perfectly acceptable to slurp your soup directly from the bowl in certain geographic locations. Not so, in others.


For instance, my husband's parents are originally from England, and though they moved to the U. S. in 1961, he grew up with far more formal table manners than I. One DID NOT put one's elbows on the table... ever. Also, everything was eaten with a utensil, regardless of what food it was, even French fries. There was no such thing as finger food. And if he or one of his brothers burped at the table, they would get smacked. I'm not condoning a belch at the table, but then again, I wouldn't smack my child for it, either. Everyone is different.

When I was growing up, I had to ask to be excused from the table before leaving, and I had to take my plate to the kitchen. I have tried to teach my children not to just get up from the table without being excused... Then, I got remarried. My teenage step-daughters INHALE their food. They are finished when we've barely begun, no matter that we all started eating at the same time. I've tried to teach them to ask before they leave the table and to rinse their plates. Sometimes they do; sometimes they don't. I think I will begin to focus on this even more now that our meals as a group are fewer and fewer. I think it's impolite just to get up from the table and walk away while others are still eating. Is it just me?

There is one thing I won't tolerate at the dinner table. Cell phones! My two teenage step-daughters have been guilty of texting during a meal, and I absolutely cannot stand this. I think it is the rudest behavior. My 12 year olds don't bring their cell phones to the table. Sometimes my step-daughters still do, particularly when we are at restaurants, and it drives me crazy! Sometimes they think I won't notice them texting under the table, but I do! I. Simply. Can't. Stand. It. I know it's not just me!

I'd love for you to join in this meme with your mealtime manners!

Email ThisBlogThis!Share to TwitterShare to FacebookShare to Pinterest
Filed Under: meals