The prompt this week is "Royal." Here's my take:

It was a night that Royalty would envy. My husband whisked me away to an intimate dinner at a local romantic restaurant called Signature Bistro. This is where the elite gather for their evening meals. The wait staff lavishes personal attention on each guest. The tables are set with cloth tablecloths, crystal, and romantic candlelight, and the waiter places your napkin in your lap as you sit down to look at the menu. 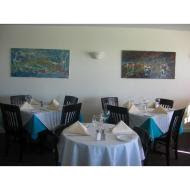 The meal was splendid. We began with some wine and bread. After savoring that, we ordered an appetizer, something I wouldn’t have thought would look or taste as lovely as it did: A crab cake drizzled with a lemon beurre blanc sauce and lump crabmeat on top. It was a little bit of Heaven. When we finished that, our entrees were ordered. I had chicken bistro, a grilled marinated breast of chicken topped with tomatoes, artichoke hearts, green onions, and mushrooms, in a chardonnay sauce. My husband ordered chicken Marsala with portobella mushrooms. I got a Caesar salad with mine as well. The lettuce was crisp, and the dressing was just the desired consistency. The entrees were served with yellow rice, steamed carrots, and steamed string beans. And, of course, the entrees were not served until my salad plate was first cleared. We did not have room for dessert.

What was so splendid was not being rushed. Each course was served independently from the others instead of bringing the appetizer, salad, and entrée out together, which happens all the time in “chain” restaurants. We were given more than ample time to peruse the menu and listen to the specials that weren’t on the menu. Wine, water, and iced tea glasses were generously refilled. When I got up to use the ladies room, the waiter stopped what he was doing and escorted me to the door. When I came back, my napkin was once again neatly folded on the table. Any tiny piece of trash, such as a sweet-n-low packet, was hurried away within a minute’s time or less. The check was not brought to the table until we asked for it, and not until he scraped the table free of crumbs. They were not in a hurry to get us out of there.

They treated us in the most regal manner, as if we were the only guests of the evening or as if we were royalty, and we enjoyed every minute of it.


To read more heads or tails, click here, and visit our host, Skittles.
Posted by Forgetfulone at 11:00 PM

Email ThisBlogThis!Share to TwitterShare to FacebookShare to Pinterest
Filed Under: heads or tails, restaurants