(T13 image courtesy of Jenn at Enjoying the Ride)

Thirteen obscure cartoons from my early childhood. I say "obscure" because, chances are, many of you have never heard of them! (Each name is a link to a site about that cartoon.)

1. Popeye the Sailorman - First appeared in 1929. Made an appearance in 1933 in Betty Boop. Famous for eating spinach to get strong to beat the antagonist Bluto. He was sweet on Olive Oil, and somehow, there was a baby (not theirs) named Sweet Pea. Wimpy was a friend with a "thing" for hamburgers. Catch phrase, "I'll gladly pay you Tuesday for a hamburger today."

2. The Pink Panther - One of my favorites. There was no dislogue, yet it had a captive audience! He was created in 1963 and made his first television appearance in 1969.

3. Woody the Woodpecker - Woody first appeared in an Andy Panda cartoon in 1940. His laugh, both amusing and annoying, was his trademark. His first TV show was in 1957. 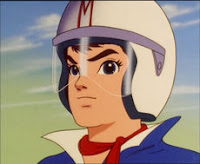 5. Speed Racer - The original anime' - directly from Japan with voice overs dubbed in English. He had a girlfriend, Trixie, a brother, Sprittle, who had a pet monkey, Chim Chim. His antagonist was the mysterious Racer X. His car was the Mach 5. Speed Racer was on television in 1967.

6. The Road Runner - This cartoon, set in the American southwest, pitted the Road Runner (beep! beep!) against Wile E. Coyote. They've been going at it since 1949. Coyote will never win! 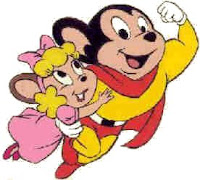 7. Mighty Mouse - Superpowers meet opera! This cartoon debuted in 1942. His catch phrase was sung, "Here I Come to Save the Day!" 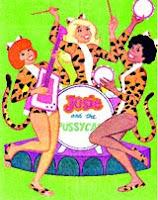 8. Josey and the Pussycats - This was created in 1963 and had its first television appearance in 1970. Much like scooby doo, they solved mysteries, but did so while rocking and rolling. It was a spinoff of the Archie series. 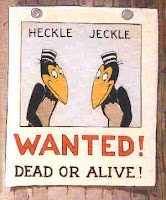 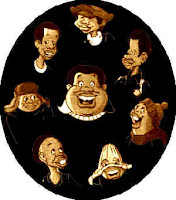 11. Fat Albert and the Cosby Kids - This was one of my other favorites. This came to TV in 1972 with Bill Cosby voicing four of the characters including the title character. "We'll have some fun here, with me and all the gang, learning with each-other, while we do are thing. Nah, nah, nah, gonna have a good time. Hey! Hey! Hey!"

12. Casper - "Casper the friendly ghost, the friendliest ghost you know..." He was created in 1945. He first appeared on TV in 1959. I used to love watching Casper on Saturday mornings.

13. Baby Huey - He was none too bright, this poor huge duck! He was created in 1949 and began appearing on television in the early 50's.

Posted by Forgetfulone at 7:50 PM

Email ThisBlogThis!Share to TwitterShare to FacebookShare to Pinterest
Filed Under: memories, thursday thirteen