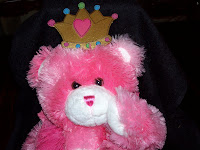 She's got a secret!
(It was such a cute pose, and she looked like she was telling a secret. The only secret is that this is the only stuffed animal I have from my husband. He got it at Build-a-Bear on our last anniversary. It has a recording in its paw that when you squeeze it, it says in his voice, "I love you, Diana. Happy Anniversary." Then in the background you can hear two of our daughters saying, "Happy Anniversary.")
Posted by Forgetfulone at 10:48 PM

Email ThisBlogThis!Share to TwitterShare to FacebookShare to Pinterest
Filed Under: photos, Wordless Wednesday