A new dog came to live in our house last Sunday, a 2 year old, male, brown and white dachsund. My ex-husband told my kids that if he didn't come to live with us, he was going to the pound. What a rotten thing to do! We already have a dog and a cat, and I didn't want another animal, but I couldn't send him to his death, either. He's so skittish, and the pound only holds the dogs for a few days before they put them down. But he's cute. And I think once he realizes that our other dog isn't going to pick on him like their dogs did, and we aren't going to be mean to him, he will warm up to us. He's already warming up to me. And he's used to sleeping in his crate at night, so that's not a problem. 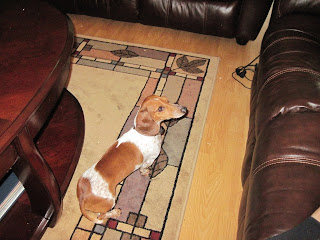 But we can't keep him. A dog, a cat, two adults, three teenagers. We already have a full house. If you know anyone in the Houston area that would like to adopt him, please be in touch with me. He's up to date on shots, and he's neutered. He loves my daughter and follows her around everywhere, so I think he's a loyal dog, and he is very sweet. He just takes a while to get to know new people and places. His name is Jackson.
More Camera Critters!

Posted by Forgetfulone at 9:48 PM