I will be taking off work to take my mom for her surgery. Wednesday is the big day - This is what normal lungs should look like. Hers do not. 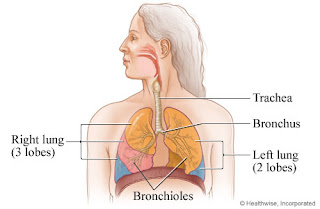 The type of cancer she has is squamous cell carcinoma. It usually starts in cells of the central bronchi, the largest branches of the bronchial tree. It is the most common type of lung cancer in men and in smokers (she's a former smoker); it is the easiest to detect early, since its distinctive cells are likely to show up in tests of mucus samples. It also tends to be most curable if found early because it spreads relatively slowly.

These are things to be greatful for!

She is having a thorocotomy in order to perform a lobectomy. The right lung has three lobes, and they will remove the bottom third that contains the cancer. She will still be able to breathe just fine without it once the breathing tube is removed after surgery. They may have to remove a rib if the cancer has attached itself to it, and it looks as though it may.

We can expect an ICU stay of at least three days and a hospital room stay for an additional 3-5 days. She will need help with some basic functions once she is able to return home.

We can also expect her to be in pain and to have chest tubes, a breathing tube, and a drain. After the pathology reports are returned, they will likely suggest chemotherapy, but she will refuse this. She's made up her mind about that.
This is just a small taste of what we are going to be dealing with and what's on my mind right now. I appreciate all your prayers and kind words.

There are so many great websites out there with information and support, but I relied mostly on Web MD and a friend, whose mother has been through something similar, for this post.

Posted by Forgetfulone at 12:24 AM

Email ThisBlogThis!Share to TwitterShare to FacebookShare to Pinterest
Filed Under: cancer, health, surgery