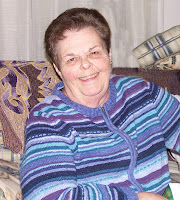 Last Monday, I drove my mom to the hospital for a lung biopsy. She had two suspicious masses. She had to be awake during the procedure to breathe in and out at the right moments to get the needle where it needed to be. Her skin was deadened on the surface, but I'm sure it was quite uncomfortable. It seemed to take forever (a couple of hours), and they had to hold her for observation and further chest x-rays for three hours after the test. We were at the hospital for eight hours that day.

She had been a smoker for years until, with God's help alone, she quit almost a year ago. I used to smoke years ago. My sister and I both did. And you know that ex-smokers hate smoking worse than anyone! But we couldn't influence her not to smoke. God did. And He and mom succeeded!

She had originally gone to the doctor for a persistent cough that felt like it gave her a lump in her throat, but nothing would come up. Most doctors simply dismissed her with an anti-biotic telling her she likely had pneumonia again. The pulmonary doctor performed x-rays and noticed something. He then sent her for several more tests culminating in the biopsy.

The results - stage 1 lung cancer (3 to 5+ years). However, she is meeting with an oncologist Tuesday. The prognosis, at this point, is hopeful. The cancer seems to be on the outside of the base of the lung, so "surgical resection, or cutting away, of the tumor generally is indicated for disease that has not spread beyond the lung. " That may prolong her prognosis if the surgery is successful.

Please keep her in your prayers for healing. I've already lost my dad (at age 69, suddenly, from hemotosis of the brain). I need to keep my mom around for a while. And thanks for reading.

Posted by Forgetfulone at 5:00 AM

Email ThisBlogThis!Share to TwitterShare to FacebookShare to Pinterest
Filed Under: family, illness