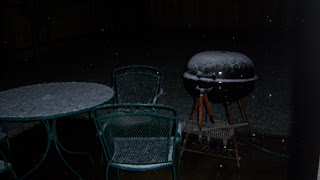 We Texans, especially those of us along the Gulf Coast, weren't cut out for snow! We get a little dusting of it, almost more ice than actual snow, and we freak out. We have to take pictures, write about it, call our friends and family, and if we're really crazy, go outside in it. The kids are out there trying to have a snowball fight. 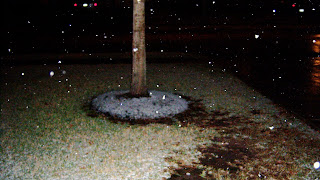 Yesterday, we had a high temp of 78! Right now, it's 34 degrees outside! It's probably not the snow many of you northern states are used to, but for us, it's a big deal. It hasn't snowed in the Houston area since 2004, and when it snows, it usually doesn't stick for very long. But, it started snowing about an hour ago. That's my back yard, a tree in the front yard, and the icy snowball my son threw at the front door just two seconds before I opened it. I would have gotten creamed with it! 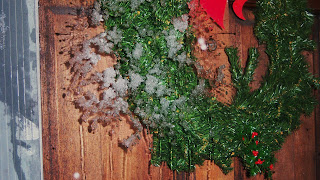 I'm really freezing to death right now! Inside. With warm, fuzzy socks on. With the heater on. With the computer in my lap. I wasn't cut out for this! How do you guys handle this?

Posted by Forgetfulone at 6:47 PM

Email ThisBlogThis!Share to TwitterShare to FacebookShare to Pinterest
Filed Under: snow, weather