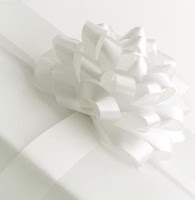 A co-worker of mine got married this summer. In the months preceeding the wedding, many of the people we work with were invited to various showers. My beef is this... I was taught that it was impolite to invite anyone to your showers that wasn't also invited to the wedding. It's like telling them, "Hey, I want a gift from you, but I don't want you to share the joy of our special day!"

In case I was having an "Emily Post" reaction, I decided to look up the "rules" online from someone who is perhaps younger and hipper than I. Tres Sugar, a trendy online community says this: "It is considered poor etiquette to invite guests to your shower that are not invited to the wedding...." The Shower Diva, an ultra-hip wedding and shower planning guide says this: "Diva Rule No. 1 -- Never invite anyone to the bridal shower who hasn't been invited to the wedding! Such a crass invitation could only be construed as trolling for bling."

So, perhaps I'm not just being old-fashioned after all. The bride-to-be was young (23), but you would think that her mother, or some older female relative, would be aware this was a faux pas. Or perhaps they don't care. I don't know. Does anyone agree?

Now, about those thank you notes...

Posted by Forgetfulone at 1:28 PM

Email ThisBlogThis!Share to TwitterShare to FacebookShare to Pinterest
Filed Under: manners