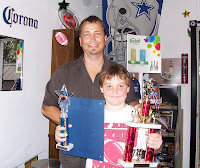 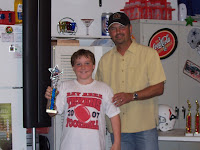 My son, his step-dad, and I went to the season-end party for his football league today. The boys had so much fun. The team mom created a fantastic DVD of the season, both still and video shots, they ate pizza and played football, and best of all, they got trophies. After all, they did make it to the playoffs.

But much to my surprise is that my son received a player award for his special teams and his off-side kicking. I had no idea. I was pleasantly surprised. Even without that award, I'd still be proud knowing he gave it his best and that he played with integrity.
Posted by Forgetfulone at 1:37 AM