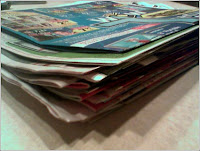 Time to throw away the thick stack of advertisements. Black Friday is coming to a close, the day after Thanksgiving, the traditional kick-off of the Christmas season, the busiest shopping day of the year, at least in 2003 and 2005. In 1993 and 2001, Black Friday ranked as the second busiest shopping day of the year, but it usually ranks between fifth and tenth. It may be the busiest in terms of crowds, but that doesn’t necessarily translate into the greatest amount of dollars spent on one day.

Accountants supposedly coined the day after Thanksgiving Black Friday because it is the day when retailers are once again “in the black.” (In less modern times, red was used to denote negative amounts, black to denote positive amounts.) This theory would assume that most stores take a loss for 11 months of the year, but in reality, most stores are already in the black by the end of the first quarter each year.

Perhaps it is known as Black Friday due to the sheer chaos that sometimes erupts when shoppers push, shove, or argue over who was there first, and perhaps because some people actually camp out all night waiting for the doorbuster sales.

The use of the term Black Friday alludes to the famous stock market crash of 1929. The day the market crashed was termed Black Tuesday. However, rather than sending the entire country into a depression, Black Friday actually boosts the US economy.

The first use of the term Black Friday was in an article entitled "Army vs. Navy: A Dimming Splendor," in The New York Times on November 29, 1975. The article has a Philadelphia dateline which implies that the term originated in that vicinity.

My mother, sister, and I used to go shopping every Friday after Thanksgiving. In recent years, we haven’t done so, until today. My mom and I went to Kohl’s, Target, Michael’s, and Bed Bath and Beyond. Kohl’s was a complete and total mess. There were too many people in the store (they were probably in violation of the fire code) so that the aisles were jammed rendering it virtually impossible to get anywhere in the store. The lines to check out wrapped completely around the store twice. Luckily, I didn’t really need anything from Kohl’s, although they had good sales. Target, while being crowded, was not nearly so hectic. Electronics and Toys, obviously, were the most crowded areas of the store, but shoppers were friendly and polite. I didn’t camp out, so I wasn’t able to get one of the items I was looking for, but I have plenty of time to get it, and I was able to buy everything else. Target had security staff in place, though there were no incidents, and they had associates available throughout the store to help customers find products. I didn’t have to wait very long to check out, so the biggest bother was the volume of people. Michael’s and Bed Bath and Beyond were both accommodating to shoppers. Advertised items were readily available, and check out lines were reasonable.

All in all, it was not a bad experience, and I do feel like I saved money on the items I purchased. BUT… I doubt I will venture out on Black Friday again next year.


For more on Black Friday, check out Wikipedia and Snopes.

Image courtesy of www.gadgetell.com/.../11/blackfriday2006.jpg
Posted by Forgetfulone at 7:15 PM

Email ThisBlogThis!Share to TwitterShare to FacebookShare to Pinterest
Filed Under: holidays, shopping