I know it's time to post a vlog, or a review of some sort, or a funny quote, or a tackle, or a picture... but I'm just not feeling it right now.  As I mentioned yesterday, my daughter's best friend is in the hospital fighting for her life.

Jenny is a beautiful, smart, loving 14 year old girl.  Saturday night, she was riding an ATV with some friends at a birthday party..  She was wearing a helmet.  There was some sort of accident, and the ATV fell on her puncturing one of her lungs.  She was without oxygen for a fair amount of time.  Then her brain began to swell (hypoxia, brain injury after another type of trauma.)  The hospital in College Station did what they could for her, but they flew her to Texas Children's in Houston on Sunday.  She hasn't been conscious since the accident.

The good news is that she doesn't appear to have a spinal cord injury.  But... there is almost a certainty of some brain damage, especially if the swelling doesn't go down soon.  The highly critical 72 hour time period will be upon us soon.  Prayers.  Please, God, listen to our prayers!

It's hard to think about too many other things when your daughter's best friend is suffering.  And how do you explain to a sensitive 14 year old that when she sees her friend, she's not going to look the same (bruising, swelling), that she's going to have tubes and machines all over the place, that she may not wake up, and if she does wake up, she may be "different."?????  My heart is breaking for the family.

Our youth group talked about, "Why do bad things happen to good people" last week in their lesson at church.  I'm so thankful for the timing of that discussion.  But, of course, it doesn't explain everything.  There is so much unknown in this world, and it's just really, really hard sometimes.

My dad died of a subarachnid hematoma six years ago.  Memories of that awful time are flooding back.  In his case, there was NOTHING the doctors could do.  Jenny, at least, has a chance.  And of course, I think often of my blog friend Queenie whose husband suffered a traumatic brain injury.  She knows, more than anyone, the effects.

And I think it is ironic in a very terrible way that Jenny's mom is a paraprofessional in our school district who works with children with severe disabilities.  I don't want her daughter to have that need. 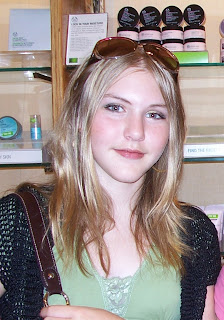 We love Jenny!
Posted by Forgetfulone at 11:22 PM

Email ThisBlogThis!Share to TwitterShare to FacebookShare to Pinterest
Filed Under: prayer