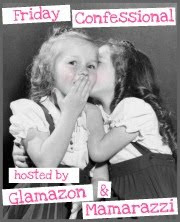 Join Mamarazzi and Glamazon for some soul-bearing confessional time! It'll do you good. Here goes:

I think it's ridiculous that all of the schools in Southeast Texas are closed tomorrow because it MIGHT snow and we're in a state of "emergency!" Give me a break!

I know they are worried about ice on the roads IF we get some precipitation and IF the temperature drops below freezing, which it has for the past three nights. But seriously? Cancelling school? I'm shocked!

This is the school district that wouldn't cancel school until the day before Hurricane Ike hit even though we're in the storm surge and flood plane and every other district was closed. I will believe snow and ice when I see it.

Right now, I just think it's typical "much ado about nothing" behavior. It rains, or it's very cold, or anything unusual happens with the weather, and the drivers in my area act like it's the end of the world.
*Update* I confess...
We do have icy roads this morning. It makes me wonder what they do up north where there is always ice on the roads! Don't they deal with it? Why can't we just deal with it? Oh, but as I suspected... no snow. I knew it!

Oh well. I was going to take the day off anyway to spend the weekend with my sister at a scrapbook retreat. (Flat Mamarazzi is coming, too!) So...

I was going to play hookey today anyway!

And this is embarrassing! I had my underwear on inside out all day last Monday. I didn't even notice it until I got home from work. How said is that?

I am hungry all the time now that I have been trying to eat a lowfat diet in order to lower my cholesterol. I admit that since I've felt so deprived, food does taste better. But I can't tell you how much I want one of my own home-made chocolate milk shakes! Bad!

Have you confessed yet?

Posted by Forgetfulone at 11:25 PM