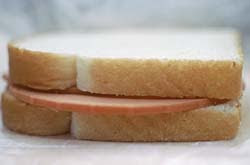 Isn’t it funny how a certain food sparks a memory? In this case, a bologna sandwich.

I see myself at age 6 or 7, standing in our kitchen, impish grin on my face, about to eat lunch which consisted of a bologna and mayo sandwich and a cream soda to drink. I can picture my young self in shorts and a red and white halter top that my mom made for me, chin-length light brown hair all a mess from playing outside with friends. Red light/Green light? Mother May I? Or maybe making mud pies and “selling” them?

The day took a turn for the worse after lunch. Bologna, mayonnaise, and cream soda (as well as a hot summer day) do not mix well. I will leave it at that. Almost 40 years later, I still won’t drink cream soda! And only in the last couple of years have I begun to eat bologna again, with caution.

This post was inspired by the topic "food" at Sunday Scribblings.
Bologna sandwich image credit.

Posted by Forgetfulone at 8:46 PM

Email ThisBlogThis!Share to TwitterShare to FacebookShare to Pinterest
Filed Under: memory, sunday scribblings