I finally finished this book!!!!!

Death Sentence: The True Story of Velma Barfield's Life, Crimes, and Execution by Jerry Bledsoe
My rating: 3 of 5 stars

This was an interesting story about the first woman executed in the U. S. since the ban was lifted in 1976. Velma Barfield (also known as Margie) was a woman convicted of the murder of her fiance' Stuart Taylor in North Carolina in 1978 by poisoning him with arsenic.

This book chronicles her horrific childhood, her descent into drug abuse, and her "redemption" through Christianity, which, of course, occured after her conviction. Velma was only convicted of one murder, but she confessed to at least six, including her own mother. She claimed she only wanted to make her fiance' sick (with ant poison), but she did not lift a finger to help any of the people she killed. She watched 4 of them die a painful and agonizing death.

This story is extremely thorough in its details, but I feel the author spends too much time on Velma's day-to-day life once she is in prison. I got tired of reading what she had for breakfast, what she read, who she talked to, what songs she sang, who she received letters from (including the Rev. Billy Graham and his wife), and every little detail about her days. The narrative makes it obvious that the author is opposed to the death penalty rather than telling the story from a neutral viewpoint. Admittedly, it made me examine my views on the issue, and I am still unsure. After all, a jury determined her punishment according to North Carolina law at the time.

While on death row, "Miss Margie," also know as "Death Row Granny" touched many lives in a positive way, but I had a difficult time feeling empathy due to the terrible crimes she committed. I don't think the author focused enough on her victims. Her children were also victims, and the story does discuss how these events affected them. It was her son who turned her in. She was, in the end, executed by lethal injection in 1984 at the age of 52. She was the first woman in the U.S. executed by lethal injection. Another woman would not be executed in the U.S. until 1998.

If you're interested in true crime, female serial killers, the debate over the death penalty, and you have time for a rather long book, then you might like to read this one.

View all my reviews 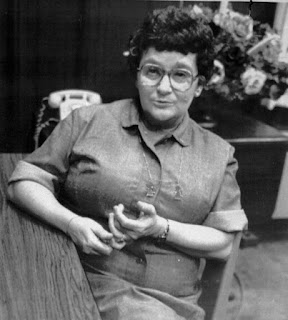 Posted by Forgetfulone at 10:26 PM