Living near the coast in Texas, hurricanes are always a concern between June 1 and November 30.  More hurricanes hit Texas than any other state (except Florida). They usually seem to hit our area toward the end of August or beginning of September; in fact, half of all hurricanes hit landfall in August or September.   But the "season" lasts six months.  In my 50+ years, I've lived through many, many hurricanes.

1.  The deadliest hurricane in the recent past was Carla in 1961.  My mom was pregnant with my sister at the time and completely unaware of the possible danger.  Forty-six people lost their lives.

3.  Tropical storms can be just as severe as hurricanes around here.  For example, Tropical Storm Allison in 2001 left devastation in its path.  Many students that I was teaching at the time lost their homes.  This one lasted over two weeks.  It formed in the Gulf, traveled north over land, then turned around and went back to the Gulf.

4.  One hurricane I remember very well was Alicia in August of 1983. I was about to head off to college.  We had no electricity for 8 days!  It came back on two days before I left for college.
5.  I spent my 40th birthday in a crummy motel in Port Lavaca due to Hurricane Rita, and it turned out that Rita was not that bad.  But with having just seen what Katrina (costliest hurricane in history) did to New Orleans two weeks earlier, we weren't taking chances.  This was my first time to evacuate, and instead of going north like everyone else, we went southwest, 100 miles outside of the predicted landfall.  And it worked!

6.  Hurricane Beulah was the first hurricane during my lifetime to hit the Gulf Coast of Texas.  This was 1967, and of course, I have no memory of it.

8.  The only other time I evacuated for a hurricane was when Ike hit in 2008, and that was mostly so we wouldn't have to live too long without power.  Again, we went southwest to Corpus Christi and didn't see a drop of rain.  Ike did powerful damage in our area:  214 deaths and $38 billion dollars in damage.

9.  Hurricane Harvey in 2017 was even worse than Ike due to the 50+ inches of rainfall in our area. $120 billion in damages (some of that could possibly be due to inflation, but not all of it!).  57 tornadoes were produced from Harvey.  It took years for some people to recover from the damage.

10. When my grandmother passed away in 1988, we were forced by the cemetery and funeral home to bury her quickly (the next day) because they were worried about Hurricane Gilbert.  Gilbert never hit Texas, but it made landfall in Northern Mexico.

11. Hurricane Dolly was threatening Texas back in 1996 when my twins were almost two months old.  Dolly also made landfall in Mexico.  We got tons of rain, but it was much needed after a long drought.

12. The longest hurricane-free stretch of time in Texas happened from October 1989 to August 1999, almost ten years. 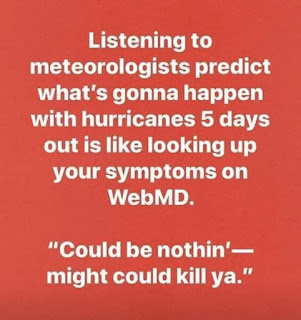 13.  My favorite hurricane? Stay safe and link up at Thursday Thirteen for more fun!
Posted by Forgetfulone at 10:55 PM

Email ThisBlogThis!Share to TwitterShare to FacebookShare to Pinterest
Filed Under: hurricane, thursday thirteen