Last weekend, my husband and I took a short trip to Louisiana.  On the way home, I asked him to stop at a plantation.  I have always wanted to visit one.  I love history, and I love taking photos, and there was one on the way home.  I found it to be quite interesting and the landscape was beautiful. 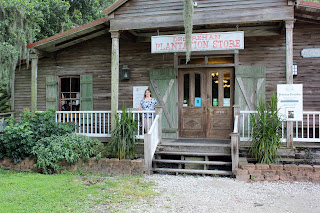 1. Jean Baptiste Honore Destrehan, whose father was a councilor to Louis XIV, became the treasurer of the new French colony which is now known as Louisiana.

2.  The home that bears the Destrehan name now was built from 1787-1790 by Charles Paquet, a master builder and designer who was also a "free man of color."
3.  Robert DeLogny was the original owner of the home, but he only lived two years after it was completed.

4.  The home is located on the banks of the Mississippi River in St. Charles Parish.  The river is separated from the home by a 2 lane road and several levees.
5.  When DeLogny purchased the land for the home, he also received ten enslaved men and women and two children.

6.  His daughter Celeste and her husband, Jean Noel Destrehan, a direct descendent of Jean Baptite Honore Destrehan, purchased the home in 1792.
7.  At this time it was a successful indigo plantation. By 1806, the plantation was producing sugar cane instead of indigo.

8.  Louise Odelle Destrehan married a judge, Pierre Adolphe Rost, and they owned the house until well after the Civil War.
9.  Judge Rost was determine to have the largest, most modern sugar can plantation.

10.  By 1866, over 700 freed slaves called Destrehan Plantation home, in former slaver quarters, in temporary housing, and even in the main house.
11. In 1910, the Mexican Oil Company, now known as Amoco, built a refinery on the property. In 1958, the defunct refinery was torn down, and the plantation was frequently vandalized due to rumors of treasure left there by Jean LaFitte.

12. In 1969, after years of neglect, the home and about 4 acres were deeded to the River Road Historical Society who set about restoring the property.
13.  Destrehan Plantation is open for tours and also serves as an event venue.

I hope you enjoyed this little history lesson.
Link up with Thursday Thirteen!

Subscribe in a reader
Posted by Forgetfulone at 2:04 AM