What is an anniversary?  It's what calendars were invented for!  Ha ha.  It's a day to commemorate a special occasion.  Today my husband and I have been married ten years.  I know, you're thinking, only ten?  I thought you were middle aged!  Yes, it's a second and better marriage for both of us.  Our anniversary used to signal that school was out, but now we have another week and a day.  But I have something special planned... It's a surprise!  I'm excited and can't wait to tell you all about it.

1. Wedding anniversary, obviously.  My husband and I always try to give each other a gift or token that signifies the traditional anniversary gifts people give.

2.  Work anniversaries. Some people celebrate the number of years they have been at a particular company, and some companies offer pins or gifts to signify the employee's service.

4.  The anniversary of the date someone special died.  For me, it is October 10, 2004.  That is the day my beloved father passed away... not sick... no warning... just here one minute and gone the next, and there was nothing the doctors could do.  Not a happy anniversary, but an anniversary nonetheless.

5.  Here in Texas, we celebrate the say we won our independence from Mexico, March 2, 1836.  Perhaps you have your own state anniversary.

6. The anniversary of Bayer aspirin first being used in tablet form is January 1.  I bet they had no idea what they started 100 years ago! 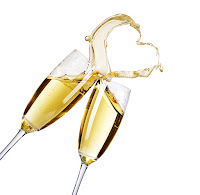 7.  For the British, June 2, 1953 is an important anniversary.  Elizabeth was crowned queen, and she still "rules" today.

8.  For fans of the Beatles, January 30, 1969 is an important anniversary. This is the day of their final, public concert as a group.

9.  Many people celebrate the anniversary of their first date with their significant others.  I believe ours was January 9, 2002.

10.  Disneyland is celebrating their 60th anniversary this year.

11.  Americans celebrate the anniversary of the birth of our nation on July 4th.

12.  9/11 will likely be an anniversary Americans will remember for a long time to come.

13.  Many colleges celebrate the anniversary of their founding.  It creates pride in their institution.  It's also a great excuse for a parade or a frat party!

You can join Thursday Thirteen here!

Subscribe in a reader
Posted by Forgetfulone at 12:30 AM