Some Things You Need to Know about Outlet Malls

It used to be a rare treat to go to an outlet mall, back when you could really get good deals, but now, they're all over the place!  My daughter and I went to Tanger Outlets which are about a half hour from us.  We had so much fun shopping (she is home for spring break), but there are some things to know about outlet malls.

1.  Outlet stores (also called Factory Stores) used to be near the factories where the merchandise was made, and most of the inventory was made up "irregulars."  The percentage of irregular merchandise that you would find now is only 1-5%.
2.  Now, the things you can get at lower prices, instead of irregulars, are manufactured intentionally with lower grade materials for the outlet store; they would never put in their regular store at the mall (such as Coach), so you need to know what you're getting if you want to save some money.  It's not going to be the same quality that you would get at the mall, but if you're okay with that, then go for it!
3.  If you see a drastic was/is price difference, that is just "retail theatrics!"  Was 200, Is 18.  Yeah, right.
(source for above information)
4.  Head to the far corners of the stores for the really good deals and clearance merchandise.
5.  Outlet malls are much less crowded during the day when most people are at work.
6.  Since factory seconds make up much less of the inventory as they did previously, they have more sales than their department store counterparts.  Sign up for their email lists so you will know when the sales are. 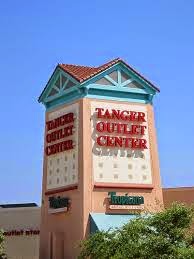 (source for above information)
7.  90% of the merchandise in outlet stores has never been on the rack in the mall department store of the same name.
(source for above information)
8.  Tanger Outlets have digital deals you can have sent to your phone.  They also have the Tanger Club where customers can earn rewards.
9.  Factories began selling their overstooked goods in "outlet stores" in the 1930's.
10.  There are over 13,000 outlet malls in the United States.
11.  The Travel Channel compiled a list of the best outlet shopping centers to visit.
12.  I have been to one of the outlet malls that made Travel Channel's list - the one in San Marcos.
13.  The biggest outlet mall in the United States (which has been open since 1963) is King of Prussia Mall in King of Prussia, Pennsylvania with 2,793,200 square feet .

I'm linking up with Thursday Thirteen.  Have a great weekend!

Subscribe in a reader
Posted by Forgetfulone at 10:45 PM

Email ThisBlogThis!Share to TwitterShare to FacebookShare to Pinterest
Filed Under: shopping, thursday thirteen