Welcome to Thursday 13!
We just got back from a trip to New Orleans.  Here are 13 things about NOLA. 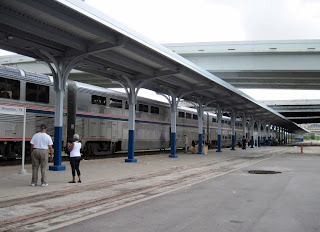 1.  You can take a train all the way from Los Angeles to New Orleans.  The Superliner used to continue on to Florida, but since "the hurricane," it doesn't go all the way there.  We boarded in Houston and rode to NOLA from there.  The train station in NOLA is so much bigger and better than the one we have here in Houston. 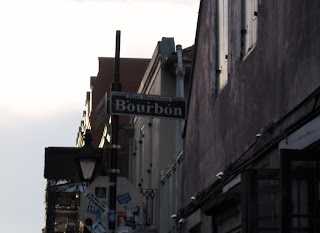 2.  Bourbon Street is not a place for youngsters and teenagers.  So many strip clubs, I couldn't count them!  And the strippers stand right at the door to lure people in.

3.  There are also lots of great live music venues whether you like jazz, blues, country, rock, or even dueling pianos. 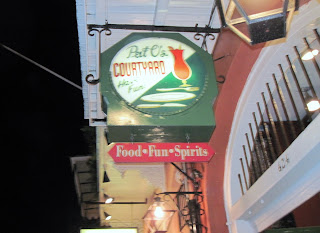 4.  Pat O'Brien's makes a tasty hurricane and has a super-fun piano bar! 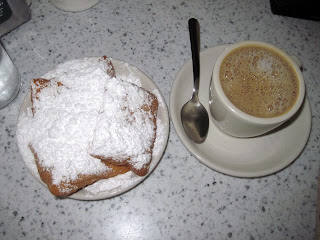 5.  A great place to go for coffee and beignets is Café DuMonde.  The original café opened in 1862.  Their specialty is café au' lait - a dark roasted coffee with chicory and steamed milk. Chicory is the root of the endive plant (a type of lettuce).  The root is roasted and ground and takes the bitterness out of the dark roasted coffee.  A beignet is a French style square doughnut covered in powdered sugar.  It's almost like fried bread, only sweet from the powdered sugar.

6.The Mississippi River is a popular sight-seeing attraction in New Orleans.  I enjoy watching the old paddle boats. 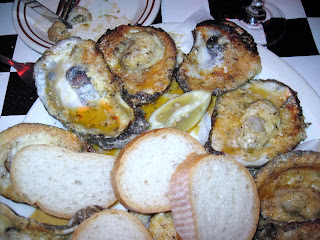 7.  I ate THE BEST char-grilled oysters at the Acme Oyster House.  I don't eat raw oysters, but I like them fried.  These were char-grilled in their shells with garlic butter and parmesan cheese.  Delicious! 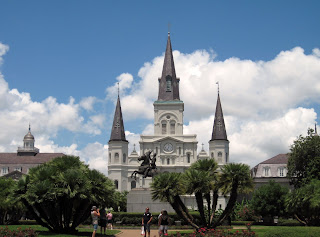 8.  Jackson Square is one of the most breathtaking sites in the city.  It is named after Andrew Jackson, hero of the Battle of New Orleans.

9.  The architecture is eclectic.  My favorite type of building has a courtyard and wrought iron balconies. 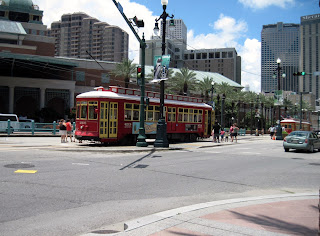 10.  The streetcars (trollies) are a handy and affordable way to get around the city without the hassle of a car.  Parking is very expensive in New Orleans.  The St. Charles line is the oldest continuously operating street railway system in the United States.  It was built in 1835.

11.  Gambling is legal.  There is a huge Harrah's casino right by the Riverwalk.

12.  Voodoo seems to be a big part of the culture of New Orleans.  There is an extensive Voodoo historical museum right in the heart of the French Quarter. 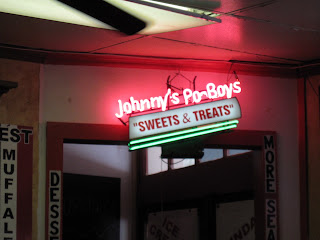 13.  The most famous sandwich of New Orleans is the po-boy, short for poor boy.  There is a great story about the inventors of the sandwich who apparently created it to help the poor boys who went on strike from their streetcar drivers jobs in 1929.  There are dozens of varieties, but the original was made with bits of roast beef on French bread dipped in gravy.  We had a great roast beef Po-boy at Johnny's.

Subscribe in a reader
Posted by Forgetfulone at 12:45 AM

Email ThisBlogThis!Share to TwitterShare to FacebookShare to Pinterest
Filed Under: vacation