You may (or perhaps may not) know that I consider myself a big Houston Rockets fan. I have for some years now. When I was pregnant and on bed rest with my twins over 17 years ago, I have vivid memories of watching the Rockets.  For a few years, I quit watching, but about 7 years ago, I began again. They are MY team! 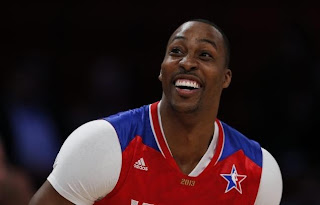 I've been listening to news about Dwight Howard becoming a Rocket for a couple of hours now. I'm happy for him, and I know that he made a tough decision, leaving behind millions of dollars in LA in hopes to help the Rockets become a championship team again. But, he's a center, and we already have a center that we like. Omer Asik (pronounced O' mare Ah' shik). We've trained Asik, watched him grow, seen him improve so much, and he is starting quality, but now that we have Howard, who also plays center, they will either move Asik to second string, a different position, or worse, possibly trade him. So, I do have mixed feelings about Howard. I'm pretty sure they won't move Howard to power forward

I'm going to have to learn more about our newest Rocket, but one thing I do like is that he is a man of faith. He's also a southern man (from Georgia). And there's no doubt he's a great basketball player. So, welcome to the Houston Rockets, Dwight Howard!
Posted by Forgetfulone at 12:26 AM

Email ThisBlogThis!Share to TwitterShare to FacebookShare to Pinterest
Filed Under: basketball, rockets