The Chronicles of New York: The Lady, The Witch, and The Subway...

This edition of The Chronicles will focus on the scariest aspect of New York according to this Texas girl... the subway! 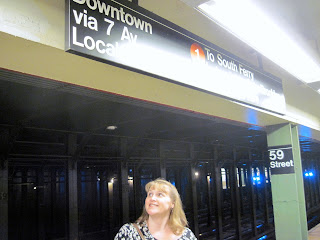 We don't have subways in Texas. If I want to go somewhere, I get in the car and go.  Our shopping malls and strip centers have huge parking lots, and nothing is in walking distance except, perhaps, a convenience store.  We have bus service through Houston, but the only time I have used that is when I need to appear for jury duty downtown, some 40 minutes away.  The only subway I've ever ridden was in Washington DC, and then, only twice.

So, the subway was both intimidating and intrguing at the same time.  But guess what?  I was a pro at riding the subway by the second day!  It was not nearly as scary as I thought.  My husband had a great subway app on the phone, and we were only five blocks from Grand Central, so we used the subway daily.  We sure didn't have money for cabs!  We did take the bus across town as well.  You can purchase a weekly pass that is good for both the subway and the bus.  Hurry!  Trains a'comin'! 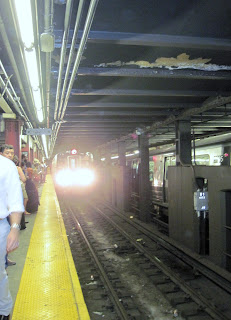 There were some interesting subway station performers throughout our five day stay, and several times, as soon as the train started moving, someone would break out with, "I'm a disabled vet..." looking for money.  One time, these three men got on and started singing out of the blue and holding out little bags for money.

The subway stations are not air conditioned, so it gets really hot down there.  The subways themselves are, however, nicely air conditioned.  We rode all manner of subway... old, brand new, clean, not so clean, uncrowded, wall-to-wall people with standing room only... we saw it all!  It turned out to be a great experience!

Subscribe in a reader
Posted by Forgetfulone at 1:06 AM

Email ThisBlogThis!Share to TwitterShare to FacebookShare to Pinterest
Filed Under: photos, vacation