I have had bison on the brain since visiting the Armand Bayou Nature Center where we observed some from a viewing platform (as well as from Guy's Grocery Games where chefs often cook with it).  I asked my husband if he knew the difference between a buffalo and a bison.  He didn't, so I decided to look it up.

1.  Well, guess what?  A buffalo is NOT a type of bison or vice versa!  Bison and buffalo are not interchangeable names. 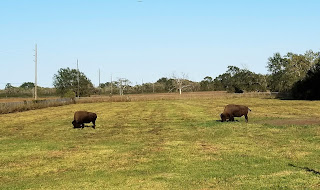 2. The confusion likely stems from early European explorers that may have described bison using the French word boeuf, which means beef.

3.  Buffalo never roamed the American plains.  They are native to Africa and Asia while bison are native to North America and Europe.

4.  The horns on buffalo and bison are very different.  Water buffalo have horns that resemble a handle-bar mustache. Cape buffalo have long crescent-shaped horns. Bison have short, sharp horns.

5.  They have thick coats that they shed in spring and summer.

6.  Bison have large humps at their shoulders as well as large heads.

8.  Bison are not endangered, but they are nearly at a threatened state.

10. Bison are the largest land animal in North America with males weighing up to 2,000 pounds and females up to 1,000 pounds.

11. Bison make grunting and snorting noises and bellows, but they don't moo like cows.

12. Bison are only aggressive if they feel threatened, and they can run up to 40 miles per hour.  They can also jump vertically up to six feet. But don't worry about them hunting you; they're herbivores.

13. They have excellent senses of hearing and smell, but they have poor eyesight.

Thanks to these great sites for giving me great information about bison!

Posted by Forgetfulone at 6:00 PM

Email ThisBlogThis!Share to TwitterShare to FacebookShare to Pinterest
Filed Under: animals, thursday thirteen