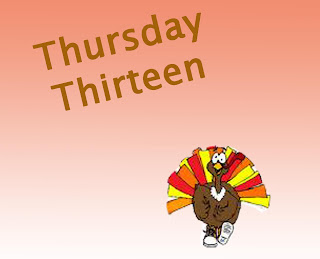 How about some lighthearted, "slightly" corny turkey jokes to relieve some stress today?

1. What did the mother turkey say to her disobedient children?

If your father could see you now, he'd turn over in his gravy!
2. How many cooks does it take to stuff a turkey?
One, but you really have to squeeze him in!

3. A lady was picking through the frozen turkeys at the grocery store, but couldn't find one big enough for her family. She asked the stock boy, "Do these turkeys get any bigger?" The stock boy answered, "No ma'am, they're dead."

4. What happened when the turkey got into a fight?

He got the stuffing knocked out of him.

5. Can a turkey jump higher than the Empire State Building?
Yes - a building can't jump at all.

6. Why did they let the turkey join the band?

Because he had the drumsticks!

7. Why did the police arrest the turkey?

They suspected it of fowl play!

8. Which side of the turkey has the most feathers?

9. How does a Turkey drink her wine?
In a gobble-let

11. What do you get when you cross a turkey with an octopus?
Enough drumsticks for Thanksgiving.

12. What did the little turkey say to the big turkey?
"Peck" on someone your own size!

13. What do you get after eating way too much turkey and dressing?
Dessert, of course

Link up with Thursday Thirteen!

Subscribe in a reader
Posted by Forgetfulone at 11:28 PM