The Superbowl Was On? 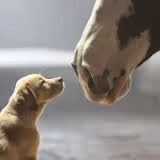 Wow!  Was that an old-fashioned butt-whipping, or what?  I really wanted to see Denver win, not because I'm a fan, but because of Manning.  But it's almost like they forgot how to play!  Fumbles, interceptions, incomplete passes, etc.  I feel sorry for Denver right now.  I'm happy for the Seahawks, though.  That was their first Superbowl win!  Way to go, guys!

How many of you actually watched the game?  Did you give up on it?  Or maybe you watched for the half time show or the commercials? The half time show was shorter than I expected.  I liked Bruno Mars.  I didn't really enjoy the Red Hot Chili Peppers, although I usually like their music.

What commercials did you like?  I will say that I want to watch the web series "Comedians in Cars Getting Coffee" thanks to the Seinfeld commercial, but I almost didn't recognize him!  I'd love to see a Seinfeld reunion!

If you're on Facebook, you've probably seen the commercial with the puppy and the Clydesdale.  Pure. Love.  I could watch that one over and over again!

I wasn't too keen on the Dober-hua-hua commercial.  Too silly for me.  Muppets don't appeal to me, either.  And quite honestly, I have no idea what the bear commercial was advertising.  I watched the bear, and it was cute/funny, but what were they trying to sell?  I didn't quite get that one.  How about you?  What was your favorite?  Your least favorite?  Did you like half time?
Posted by Forgetfulone at 10:52 PM

Email ThisBlogThis!Share to TwitterShare to FacebookShare to Pinterest
Filed Under: advertising, football, sports