I haven't had the chance to partake in "Company Girl Coffee" in quite a while, and I've missed it!  So, come on in, grab your favorite beverage (coffee, tea, soda for me), prop your feet up, and please stay a while.

Today I want to talk about my adorable cat, Lacy. 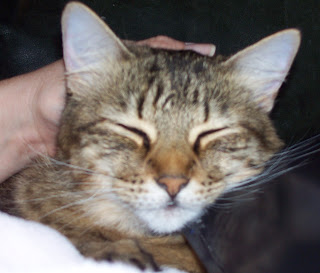 But... she does have a behavior that is driving me bonkers.  She's supposed to be an indoor kitty, but she's very curious, and my husband lets her out in the back yard.  From there, she disappears under our back fence into the area behind our house that backs up to the elementary school track and playground.

She has been "gifting" us with critters!  The first one was a locust.  Not a big deal, but super-hilarious because she had it in her mouth, and it was still buzzing, making that cicada noise, and she tried to run away from the noise not realizing it was in her mouth.  Up and down the stairs she went, buzzing the whole time!  It was a hoot!

Then she brought in a lizard, basically dead, or at least severely injured, easy enough to capture from her mouth.  Next was a gecko, not dead, that she carried through the house and up the stairs again.  I don't like geckos!  I was able to get it before it could slither behind a piece of furniture.

About a week ago, she was making a strange meowing sound, and I also heard a squeaking noise, as she walked around the living and dining rooms.  The noise was strange because her mouth was full... of mouse!  She had a baby mouse safely tucked in her mouth, injured I believe, but not yet dead.  I guess I scared Lacy because she dropped the mouse, and it sort of staggered a little bit, and mice really do squeak!  I ran to get a broom and dust pan so I could capture it and set it free, even though it was already half dead.  When I turned my back, Lacy picked it up in her mouth again and raced up the stairs, first to my daughter's room, then mine, then back into the hall.  She finally dropped the mouse again, and it tried to scamper behind my washing machine, but I got it.  In the process, it died, though I tried to save it.

Two days ago, Lacy caught another critter.  When I got home that night, she was in my bathroom, and she was looking down and pawing at something.  When she turned around, I saw it.  A snake!  A tiny snake (maybe the diameter of a pencil and about 8-10 inches long).  A dead snake (at least by the time I saw it).  But a snake nonetheless.  Understand this... I HATE snakes!  I don't like frogs, lizards, geckos, etc., but I abhor snakes.  The only good snake is a dead snake.  No, that's not true.  There is no good snake!  This is one varmint I decided I couldn't handle on my own, especially since I wasn't sure it was dead.  My husband did the clean-up on this one.

People say she is "gifting" me, but she doesn't bring her goodies to me.  She stalks and hunts, and I believe she wants to play with her prey then eat it.  Whatever the case may be, she has found her inner feline and it just may drive me crazy in the end!

Thanks for staying for "coffee" sponsored by  Home Sanctuary and hosted by the amazing and inspiring Rachel Anne.

Subscribe in a reader
Posted by Forgetfulone at 3:21 AM