And No One Told Me? 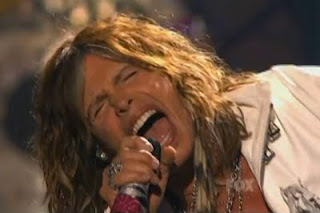 Image Credit
So, I don’t watch American Idol on a regular basis. I’ve never watched an episode until this season, and then, it was ONLY because my daughter was so into it. Music is just not my favorite thing, unless I can fast –forward through the parts I don’t want to hear. I would actually rather watch a soap opera. (You can laugh if you want to!)

I was up late last night watching the finale’ for lack of something better to do. I knew who won, but I wanted to see some of the performances like Judas Priest and Tom Jones (I know, right? What a combination!), and much to my complete and utter surprise, there was Steven Tyler singing “Dream On”, just about the best rock song ever!

Did my daughter bother to tell me about this? Did anyone else even mention that he performed? How could they not tell me? What if I had deleted it from the DVR instead of watching it? Oh. My. Gosh!

He may be 63, but Steven Tyler is still amazing! And, gosh, I love that song! Dream On everyone!

Subscribe in a reader
P. S.  Join Mamarazzi and Shawn for the monthly vlog tomorrow.  Tell 'em I sent you!
Posted by Forgetfulone at 3:23 PM

Email ThisBlogThis!Share to TwitterShare to FacebookShare to Pinterest
Filed Under: music, Television