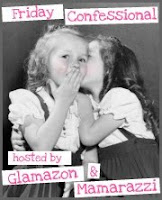 Come confess. You know you'll feel better. Visit Mamarazzi and Glamazon for all the details.
I confess...
I'm disappointed that my daughter doesn't want to follow in my footsteps and try out for her high school's drill/dance team. Actually, she didn't even tell me the tryouts were coming up, and now they're over. But she wouldn't have tried out no matter what. It's just not her thing. She loves to dance, but she's just not interested in being on dance team. I need to build a bridge and get over it.
I confess...
I feel guilty. I feel like a bad mom. I took my kids to my mom's yesterday so they could spend some time with her. She's been looking forward to seeing them. They both begged me to stay, too, but I just didn't want to. I feel so bad, but they were going to see Rango (which I don't want to see), and I needed to go bra shopping (see last week's confessions), and I just wanted to come home for a night so I can go to lunch with a great friend today. But now I feel guilty.
I confess...

I've found another "dress" show to watch! It's called Girl Meets Gown on WEtv. I have no idea why I am so interested in these shows! This one is set in my home state of Texas, and it's similar to Say Yes to the Dress on TLC (which I am highly addicted to - so much so that I think I've seen every episode, and I'm not above watching reruns). So, I have a new show! Happy dance!


Come on and confess with us!

Posted by Forgetfulone at 12:01 AM