Boy have I had a situation to tackle! My husband was looking for a survey on the house, one that was done ten or eleven years ago before we were married, and no amount of convincing would persuade him that it wasn't in our file cabinet. 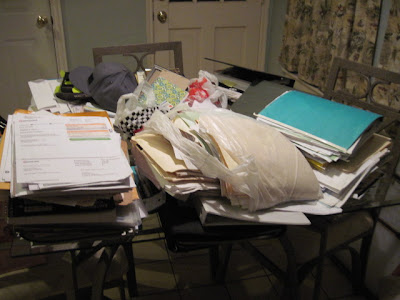 Not only that, but he had stacks of papers in no apparent arrangement. What happens any time he can't find what he's looking for? First, I'm called upon. Did I throw it away? No. Did I file it wrong? No. (At least I file papers!) He doesn't mean to imply blame , but he does.

And guess what? The paper he was looking for wasn't in the file cabinet at all, and, as it turns out, was a paper I had never seen before in my life that he had put in a folder, with some other folders, in a sack, in the attic. Hmph!

I left everything sitting there for a couple of weeks hoping he would clean up the mess he created. Last week, I finally reached my limit. I had to try to put Humpty together again because it wasn't going to happen by magic, and he was definitely in no hurry. Plus, he doesn't like to throw things away. He has camping lists and pamphlets from ten years ago!

Rome wasn't built in a day, and this mess wasn't cleaned up in one day. It took several days, but I finally tackled it, with the exception of one little pile that my husband HAS to go through. I threw away quite a bit, too. Well, actually, I recycled it. And that's my tackle! 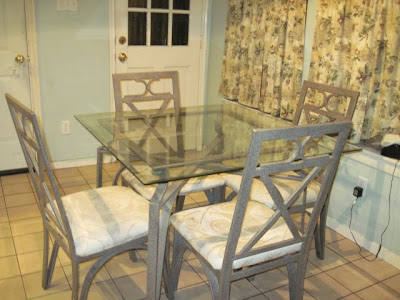 Posted by Forgetfulone at 7:30 AM

Email ThisBlogThis!Share to TwitterShare to FacebookShare to Pinterest
Filed Under: 5 Minutes for Mom, household chores, tackle-it-tuesday