Halloween  is just 2 days away!  My children aren't little anymore; in fact, most of them don't even live with my husband and me anymore.  When they were little, trick-or-treating or trunk-or-treat at church were big deals.  Not so much anymore.  But in honor of Halloween, here are some "fun facts" from Random Facts.  Join Thursday Thirteen here.

1.  The first Jack-o-Lanterns were made from turnips!  Strange!
2.  Halloween is the second highest grossing "holiday" after Christmas.
3.  The world record for the largest pumpkin was set by a man named Norm Craven in 1993 with an 836 pound pumpkin.
4.  The first known printed use of the term trick-or-treating occurred in Alberta, Canada in 1927.
5.  It is believed that Halloween began in Ireland.
6.  There is a legend that says if a person wears his or her clothes backwards and walks backward on Halloween, he or she will be visited by a witch at midnight. 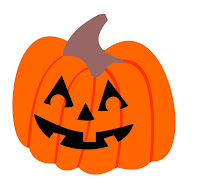 7.  Fear of Halloween is known as Samhainophobia.
8.  In 1974, an 8 year old boy was poisoned with cyanide in his Halloween candy.  I remember it vividly because it happened less than 20 miles from my home.  His dad killed him to get $20,000 from a life insurance policy he had recently taken out on his children.  He had tried to poison his daughter, but it was his son, instead.  He was found guilty of murder and received the death penalty.  I was actually at his execution because I went to college about two miles from where Texas' death row inmates are housed, so some of us college kids went over to see the protesters.  The father's nickname was the Candy Man.Okay,, this wasn't really a "fun" fact, but it is a fact.
9.  The record for most jack-o-lanterns lit at the same time was set in Boston with 30,128.

10. Harry Houdini the mysterious magician died on Halloween in 1926 from appendicitis.
11. Halloween was once a festival that celebrated the boundaries between life and death.
12. Fifty percent of kids prefer chocolate for Halloween.  Me, too!
13. The owl is a popular Halloween image because Medieval Europeans once believed that owls were witches.

Subscribe in a reader
Posted by Forgetfulone at 10:44 PM

Email ThisBlogThis!Share to TwitterShare to FacebookShare to Pinterest
Filed Under: halloween, thursday thirteen