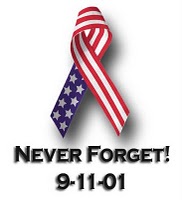 I remember exactly where I was. My next-door-teacher came to get me from my classroom to show me on the television what was happening. At first, I thought it was a Hollywood stunt. Then, I thought it was a joke. He explained it to me, and reality sank in. I realized why the skies had been eerily quiet that morning. I lived near a major airport, and I was so accustomed to planes flying over every few minutes, and there was nothing in the sky.

I was at the school where I taught. My twins, age five at the time, were at a different school for kindergarten. I know exactly where I was, and I remember how I felt, but I cannot describe it. I hope we never forget. I hope we are better prepared for a tragedy such as this, and I hope it never happens on American soil again.

Posted by Forgetfulone at 10:38 PM

Email ThisBlogThis!Share to TwitterShare to FacebookShare to Pinterest
Filed Under: 9/11, history, memories