Taking care of the goat...

I love it when people ask me what I've been doing lately, and among the normal responses like shopping, working, etc., I get to say, "Taking care of the goat."  They usually do a double-take!  Last week, my boss's response was, "Wait, did you just say 'goat'?"  I had to giggle!

Yes, I help my son take care of a goat, which he named Kuzco.  The goat is an FFA project, and it's a lot of work!  We are city people.  I did live in a smallish town growing up, which has grown considerably since, but we never had livestock.  We had a dog.  At one time we had two cats.  And my sister had a pet rabbit... for a while.  But livestock?  I know nothing about livestock!  But I'm learning. 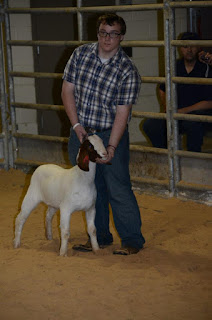 I'm finding that it's actually quite interesting.  It's both fun and hard work.  Our poor Kuzco got sick and lost ten pounds.  He would hardly eat anything for several weeks.  While the other goats were gaining, he just kept losing.  He finally got treated for an upper respiratory infection (yes, even goats get them), and we've had to give him everything from ensure, to electrolytes,to  pro-biotics, and vitamin B.  He's FINALLY got his appetite back and starting to gain a little weight now.  He's got some catching up to do!  Can you imagine a goat not wanting to eat?  They eat everything!  If a goat isn't eating, something's wrong. 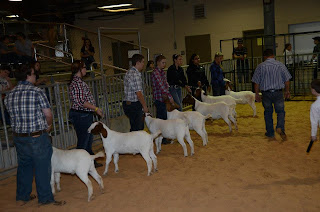 Anyway, so while we are working to get him to gain weight and fill out, we also have to train him.  He has to run to develop strong muscles in his back legs.  The goats always eat with their front feet propped on the fence so their back legs get stronger, but he needs more.  He also walks.  He gets dewormed twice a month, and he's taking supplements along with his food (developed for livestock, not human supplements).  He gets a bath about twice a month.  And my son had to train him to walk correctly in the ring and how to set him up for the judge, and how to present himself to the judge - the showmanship aspect of it.  Who knew so much went into this?  I guess I always thought you just feed them and they're ready to go.  Not so.

Our livestock show is at the end of January, so we don't have much time now.  I hope we can get Kuzco caught up enough to look good next to the other goats instead of scrawny like he was when he was sick.  If he doesn't do well at the show, my heart will break, but it's going to break anyway when we have to see him go.  I kinda like that goat!

Subscribe in a reader
Posted by Forgetfulone at 10:44 PM

Email ThisBlogThis!Share to TwitterShare to FacebookShare to Pinterest
Filed Under: animals, home, kids