I haven't blogged in a couple of weeks, I think.  It seems like a long time.  So much has been happening here, both good and bad.  But I don't want to focus on the bad.  Suffice it to say, it's been pretty dang depressing.  So,  here's something happy! 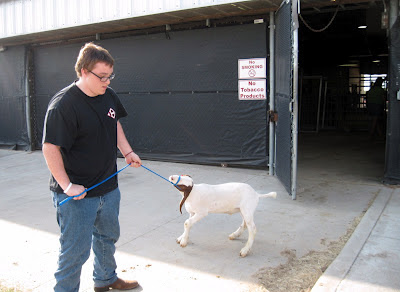 He's a little stubborn right now.  Understatement.    But, we can fix that! 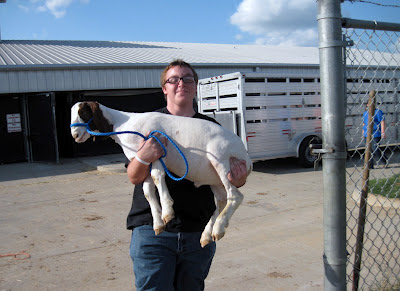 Kuzco is my son's FFA project for the next four months. (He named him; I didn't.)

He got his market goat six days ago.  Our district does a kind of lottery system.  They bring in enough goats for every student that wants to show one plus a few extras.  The students draw numbers, and that is the order in which they get to go in the arena and select their goat.  My son was number 27 out of 35, not where I wish he could have been.  There were only 12 goats left when it was his turn.  We had studied information about how to select a goat, but when you only have 12 to choose from instead of 30, you kind of get what you get.  But, that being said, he can make this a great show goat if he works at it.

We have never had a goat in our life.  He lives at the district barn, and my son has to go up there at least twice a day every day.  I knew he would have to feed him twice a day, but I had no idea what else went into raising a goat successfully.  Feeding, cleaning, yes.  But also bathing, shearing, de-worming, trimming their hooves, exercising, and teaching the goat the showmanship aspects of the project.  My son is very enthusiastic  right now.  I sure hope it lasts! Last year's rabbit project didn't go so well, so I'm hoping for a more favorable outcome this year.  Wish us luck!
Posted by Forgetfulone at 10:30 PM

Email ThisBlogThis!Share to TwitterShare to FacebookShare to Pinterest
Filed Under: animals, children, school