If I were the type of person who could abandon a book, I would have abandoned The Shepherd within ten pages due to the author’s blatant error in using the present perfect verb tense. More about that later. I just don’t abandon books. I have to finish what I start, and unfortunately, I finished this one. Apparently, the author didn’t, though. Thank goodness I got this via a 99 cent special from BookBub. 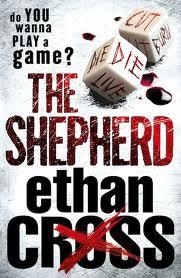 Ethan Cross is the author’s pen name. I don’t believe it’s a coincidence that he chose the name Cross. I believe he wanted to invoke thoughts of James Patterson’s iconic hero, Alex Cross. But Ethan Cross, James Patterson you are not.

First of all, the reader is assaulted by a barrage of characters that have no obvious link until too far into the book. The first few chapters seem like they are pieces of different stories. Second, there are numerous mythological references throughout the story which I find to be trite. Third, the characters are completely unbelievable. They say things to each other and to themselves that no normal, logical person would say. And Cross does not create any likable characters in the whole bunch, including the protagonist.

I am happy to suspend belief when I read crime thrillers, but Cross crossed a line. His protagonist fought six or seven men in the first chapter of the book and wasn’t even sore. He received a gunshot wound, yet continued to act as though it only gave him strength. Cross didn’t develop a hero and a villain; he developed a super-hero and a super-villain. No one could do the things these men did and continue to function. And why would approximately ten people have a clear shot at a serial killer and not take it, no matter that they want to use him to meet their “organization’s” goals. I found that ridiculous!

I felt cheated when it was revealed that the whole plot with the sheriff was an elaborate audition for a new recruit. That plot device is just as bad as the “it was all a dream” scenario. And I was cheated again when the Dempsey brothers were introduced, likely hoping to hook the reader into the next novel. And there is no way Ackerman would be alive after walking into the fire. Even if he were, there is no way the police wouldn’t have had all of the entrances sealed off including the tunnel he supposedly used to escape. I felt cheated when it was mentioned there was a connection between Ackerman and Marcus, and that connection wasn’t revealed.

Cross is guilty of overuse of clichés such as “It’s meant to be.” He’s guilty of allowing his characters to over-soliloquize. And he’s guilty of thrusting his symbolism in the reader’s face as though we can’t see that darkness is the antithesis of light. I believe the reader can infer symbols in darkness, light, shepherds, wolves, flocks, vigilantes, and so on, if given the chance instead of having it forced upon him or her. He also uses far too many words when few would have sufficed.

Now let’s get to the way Cross butchers the English language. How in the world did this get past the editors? I counted at least four instances of using the incorrect present and past perfect verb tenses (saying “have went” instead of “have gone” which makes the author sound uneducated, in my opinion). I truly almost abandoned the book when I read the first one. In addition, Cross uses the nominative case “he” instead of the possessive case “his.” He puts a comma outside his quotation marks. I frequently read “gonna” and “wanna” instead of “going to” and “want to.” There are misplaced modifiers, inconsistent verb tense, and a malapropism as well. Cross’s spelling of homophones is atrocious! (“sorted” instead of “sordid,” “poured” instead of “pored,” “horded” instead of “hoarded) I expect some mistakes might make it past an editor, but there were just too many.

I believe that Cross can craft a clever story, but it’s the manner in which he tells it that will make a difference in whether or not he ever rises to the level of James Patterson.

Subscribe in a reader
Posted by Forgetfulone at 1:01 AM